Enable Life is an insurance broker firm unlike any other. It’s built on a mutual respect and desire to really help you, your family, your business and your life. Our founder has had her own personal challenges and knows first-hand what life can throw at you. That’s why we’re with you and you.

Enable Life was founded out of a very personal experience of our Founding Director & Business Protection Specialist, Sam Hallett.

Sam, like many, thought she was indestructible and her body would just keep going no matter what. In November 2013, Sam started to feel consistent tiredness, memory loss and was living on sheer willpower. In January 2014, the doctor said these words to her, “We think you may have Chronic Fatigue”.

At the time, Sam was an in-demand project manager and was paid well for it. With enough savings in the bank to last several years, Sam took the option to resign from the corporate world and focus on her health. However, even with a little income from a residual part-time business Sam had started to boost her income, the savings were going down fast. Luckily for Sam, she was finding some answers and gradually she was regaining her health, and she saw that she’d be able to start working again – though she knew she would never again be able to keep up with the pace of a career in Project Management.

Coming to learn about Life & Health Protection, Sam’s stomach fell. Had she taken out a protection during the height of her career, her policy would have continued to pay her % of her full-time income for the rest of her life. This was a stark realisation. Because now, not only did she have to generate income again, she also had to rebuild her savings to get to where she once was.

She knew, that had she have had this policy, her life would look very different today and she her time healing could have been 100% focused on her health and wellbeing rather than where the money will come from when it runs out.
As an ex-accountant, and inspired by her own story, Life & Health Protection was a natural transition for Sam; and Enable Life was born.

Unfortunately, Sam’s story is not unusual however most people do not get to recover from chronic or critical illness, making it important for everyone to anticipate the unexpected and ensure they have the right coverage.

Don’t be a Sam – Get Protected

Like many others, Sam had a Life and Critical Illness Insurance that she took out when getting a mortgage. However, Sam had never really been educated in how to protect your salary and savings from an ‘it will never happen to me’ scenario.

Sam was lucky that her employer provided her 6 months of full pay and 6 months of half pay – but when you are chronically ill with no prospect of recovery – this income only provides a short term benefit and speaks nothing of the future and what will comes next.

If Sam had had Income Protection her life would look very different today. In fact, she would be being paid % of her Project Management until she is 65. Of course, Sam is no where near that age right now, so thankfully! 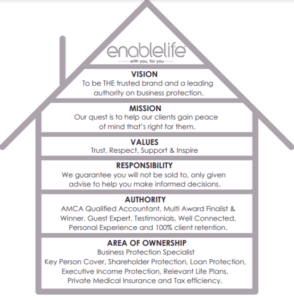 At Enable Life, we feel it is important to not only have strong values but also to share our values with our clients:

Being Authentic in everything means our clients have the trust that they are in safe hands; they are listened to as individuals as we are all unique; they ask us a question, they will get the honest answer every time.

Being Supportive in every way to our clients by hand-holding and guiding them through the journey in a structured way; which is on their timeline, not ours.

To be Inspiring to our clients to motivate them to become more knowledgeable in an area which is not educated and, at times, has little understanding…or even with our own story of why we do what we do.

At Enable Life, first and foremost is to listen to our clients, get to know them as individuals, understand the issues that they are looking to solve; which will bring them financial peace of mind and their family dignity when something happens.

Giving advice in an open, simple and transparent way to clients is important to us. We ensure the client fully understands the options available to them so that they can make informed decisions.

Here we are today

Motivated to help others avoid the fate or worse, Sam trained as Protection Specialise and began Enable Life to provide Business Protection and Personal Protection to individuals and families throughout the UK.

And because of her Financial background, she understands how to structure policies to be tax efficient and account for the needs of a business, its owners and employees. She understands from professional experience how stressful things become when the unthinkable happens, and how important it is to make sure there is enough cash to meet everyone’s needs – whether personally or to keep the cash flow demands of a business.

At Enable Life, we pride ourselves in using simple language to make sure you are more than adequately covered and understand exactly what you have in place and how to access it should you need to. When working with you, our first step is to undertake a full life analysis and listen to your concerns so we can recommend a bespoke solution to meet your unique needs.

When it comes to your business, we can help you get the control you need.

When it comes to you and your family, we can help you have total peace of mind.

When it comes to your work and life, we can help you in a whole range of ways.

Enable Life Limited is an Appointed Representative of Primis Mortgage Network, a trading name of First Complete Limited which is authorised and regulated by the Financial Conduct Authority.

Accountant services are referred to a third party. Enable Life Limited nor PRIMIS Mortgage Network are responsible for the advice received